Sarawak’s unlikely nooks of knowledge, State protects another of its species — bookworms 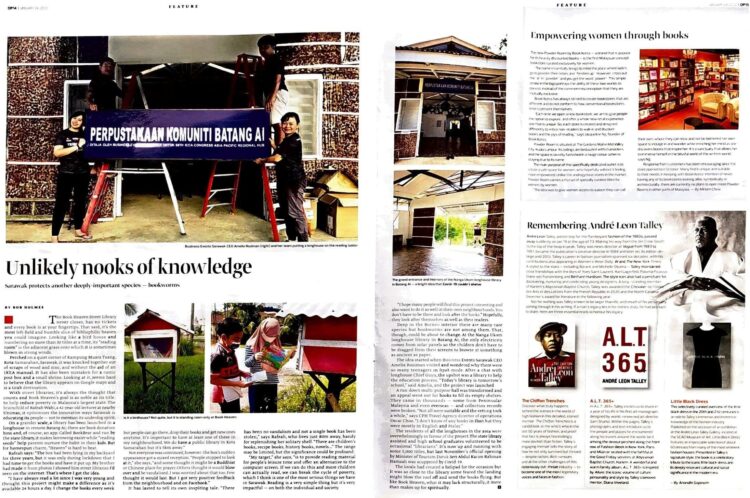 Original copy of the article featured on The Edge Options written by Bob Holmes.

This article is written by Bob Holmes and first published in Options, The Edge.

The Book Heaven Street Library never closes, has no tickets and every book is at your fingertips. That said, it’s the most left-field and humble slice of bibliophilic heaven you could imagine. Looking like a bird house and numbering no more than 30 titles at a time, its “reading room” is the adjacent grass on which it is sometimes blown in strong winds.

Perched on a quiet corner of Kampung Muara Tuang, Kota Samarahan, Sarawak, it was knocked together out of scraps of wood and zinc, and without the aid of an IKEA manual. It has also been mistaken for a rustic post box and a small shrine. Looking at it, it seemed hard to believe that it appears on Google maps and is a Grab destination.

With street libraries, it’s always the thought that counts and Book Heaven’s goal is as noble as its title: to help reduce poverty in Malaysia’s largest state. The brainchild of Rafeah Wahi, a 42-year-old lecturer at nearby Unimas, it epitomises the innovative ways Sarawak is educating its people – not to mention its underdog spirit.

On a grander scale, a library has been launched in a longhouse in remote Batang Ai; there are book donation bins and, of course, an app. Called BookBear and run by the state library, it makes borrowing easier while “reading seeds” help parents nurture the habit in their kids. But for homespun charm, “Heaven” is hard to beat.

Erected in July last year, Rafeah says: “The box had been lying in my backyard for three years, but it was only during lockdown that I had time to get the books and have it put up. My brother had made it from photos I showed him of street libraries I’d seen on the internet. That’s where I got the idea.”

“I have always read a lot since I was very young and thought this project might make a difference as it’s available 24 hours a day. I change the books every week but people can go there, drop their books and get new ones any time. It’s important to have at least one of these in my neighbourhood. We do have a public library in Kota Samarahan but it’s five kilometres away.”

Not everyone was convinced however: its sudden appearance getting a mixed reception. “People stopped to look at it,” she says, “and some thought it might be a Buddhist or Chinese place for prayer. Others thought it would blow over and be vandalized. I was worried about that too. Few thought it would last. But I got very positive feedback from the neighbourhood and on Facebook.”

But it has lasted to tell its own inspiring tale. “There’s been no vandalism and not a single book has been stolen, says Rafeah who lives just 80m away, handy for replenishing her solitary shelf. “There are children’s books, recipe books, history books, novels…” The range may be limited, but the significance could be profound.

“My target,” she says, “was to provide reading material in people’s leisure time and to offer an alternative to the computer screen. If we can do this and more children can actually read, we can break the cycle of poverty which I think is one of the most serious things we have in Sarawak. Reading is a very simple thing but it’s very impactful – on both the individual and society.

“I hope many people will find this project interesting and also want to do it as well in their own neighbourhoods. You don’t have to be there and look after the books.” Hopefully, they look after themselves as well as their readers.

Deep in the Borneo interior there are many rare species but bookworms are not among them. That, though, could be about to change. At the Nanga Ukom longhouse library in Batang Ai, the only electricity comes from solar panels so the kids don’t have to be dragged from their screens to browse at something as ancient as paper.

The idea started when Business Events Sarawak CEO Amelia Roziman visited and wondered why there were so many teenagers in lepak mode. After a chat with longhouse Chief Guyu, the upshot was a library to help the education process. “Today’s library is tomorrow’s school,” said Amelia, and the project was launched.

A run-down multi-purpose hall was transformed and an appeal went out for books to fill its empty shelves. They came in thousands – some from West Malaysia and even overseas – and collection records were broken. “Not all were suitable and the vetting took a while,” says CPH Travel Agency Director of Operations, Oscar Choo. “I don’t know of any books in Iban but they were mostly in English and Malay.”

The residents of all the longhouses in the area were overwhelmingly in favour. The state library assisted and high school graduates volunteered to be occasional “librarians”. It’s now up and running with some 5,000 titles, but last November’s official opening by the Minister of Tourism, Dato Sri Abdul Karim Rahman Hamzah, was scuppered by Covid.

The locals had created a helipad for the occasion but it was so close to the library some feared the landing might blow the roof off and send the books flying. But like Book Heaven, what it may lack structurally, it more than makes up for spiritually.